The LED industry lacks killer applications, not only the Taiwanese factory is miserable, but also the profits of international companies such as Cree Q1. However, the recent emergence of new micro LED technology is seen as beyond the next generation of OLED display. The number of LEDs used in each TV panel jumps from millions, which will be able to smash the global epitaxial machine capacity, which is referred to as the industry "savior." 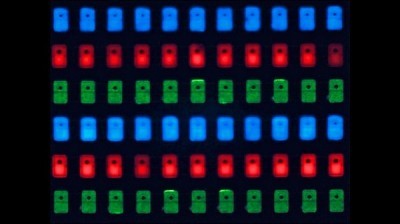 PixeLED is ultra-small in size and can exhibit extremely high resolution, and the large amount is considered to be the savior of the LED industry. The picture shows a red, green and blue PixeLED magnified hundreds of times under the microscope.

The global epitaxial machine MOCVD is seriously oversupplied, and the oversupply is over 20%. The old equipment manufacturer Aixtron announced on Monday that it was acquired by FGC, indicating that the German factory is not optimistic about the prospects.

But the bottom of the valley has the opportunity to flip at any time, what kind of killer application is enough to replace the huge demand for lighting backlight? The answer is the micro LED that is visible under the microscope.

Micro LED has two characteristics: power saving and high resolution. The industry has been able to achieve a size as small as 30 Ã— 30 microns (0.03mm), the volume is 1% of the current mainstream LED, and the width is smaller than one hair. Because of the ultra-small performance, the resolution of the performance is particularly high; the Retina display of the Apple iPhone 6S has a resolution of about 400 ppi, and if the micro LED is used, it can easily reach 1500 ppi or more.

At present, the number of LEDs used in 32-inch TVs is about 30~40. If you use micro LEDs, each of them is at least a few million, and the amount is amazing. It is expected to boost the production capacity of the upstream epitaxial plant. Samsung, Japan JDI, Nichia Development has begun. Among the few manufacturers in the world that have the ability to develop, Taiwan is one of them, and has applied for a patent called PixeLED. Li Yunli, CEO of Innolux, said: â€œThe Taiwanese factory is absolutely capable of producing such wafers, but the key to success is two: one is the willingness of the brand factories such as Apple and Samsung; the other is the wafer moving technology, which carries millions of ultra-small ones at a time. LED chips have thresholds to overcome."

Various products of CD Cases, providing product images and basic parameters with each CD Cases and CD Cases; We are a 12 year professional Chinese manufacturer of CD Cases, and look forward to your cooperation!