Sony announced in July 2011 that it will use tin (Sn) anode materials to increase the capacity of lithium-ion rechargeable batteries. The battery unit of "18650" size (18mm diameter x 65mm height) was developed this time, with a capacity of up to 3.5Ah. Compared with the company's 2.8Ah original product put into production in 2010, the capacity has increased by 25% (Figure 1). The volumetric energy density is 723 Wh/L. The weight was 53.5 g and the weight energy density was 226 Wh/kg. The charging voltage is 4.3V. The supply is scheduled to begin in 2011.

In fact, this is not the first time Sony has made a lithium-ion rechargeable battery with a negative anode for commercialization. Since 2005, the company has sold "14430" size battery cells with a diameter of 14mm and a height of 43mm for cameras. This time, the 18650 size product will be mass-produced for laptops larger than the 14430.

In order to achieve a high capacity of 3.5Ah for the 18650-size battery unit, "only the negative electrode material can be changed" (Sony Hirohiro, Director of Commodity Design Division 1 of the 1st Business Unit of Sony Energy Device LI). Sony increased its capacity by changing the anode material from the original low crystalline carbon (hard carbon) to graphite before and after 1997.

After that, the capacity was increased to about 2.5 times by the improvement of the positive electrode material, but the capacity increase rate has been decreasing recently. As a result, Sony decided to change the anode material of the 18650 unit again after about 14 years, using Sn-based materials.

The negative electrode material of the novel lithium ion secondary battery is constructed such that ultrafine particles composed of a Co-Sn alloy are distributed in the carbon phase. Co forms carbides with carbon and combines them.

LiCoO2 will increase in temperature when an abnormality such as an internal short circuit occurs. In this case, oxygen is generated, and oxygen may be combusted after reacting with the organic electrolyte. Therefore, Sony "treated 0.1 to 1 Î¼m thick on the surface of LiCoO2 particles" (upper hole). According to the company, this method reduces the reaction of oxygen with organic electrolytes.

In the separator, in order to prevent an internal short circuit from occurring, a metal oxide ceramic layer having a thickness of several Î¼m was formed on both surfaces of the polyolefin microporous film (Fig. 3). The ceramic layer has a three-dimensional structure, and metal oxide particles having a diameter of less than 1 Î¼m are connected to the resin as a binder in a mesh shape. When an abnormality occurs, the resin net having high flexibility and adhesion can cause an insulator, that is, a metal oxide, to adhere around the foreign matter, thereby restricting the passage of current. 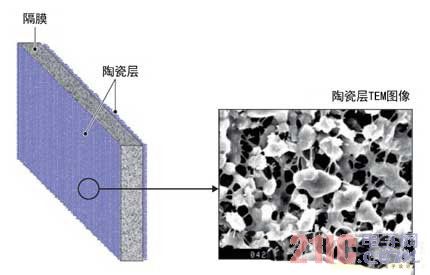 Of course, there are still problems with the new unit. For example, after repeated charge and discharge 300 times, the capacity will drop to about 80% of the original. After repeated charging and discharging for 500 times, the capacity will drop to about 60%, and it will barely reach the minimum standard for notebook computers. In order to expand sales in the future, it is necessary to increase the charge and discharge cycle of the battery unit.

PTFE fabric have high performance in smooth and high-glossy coating, which has great release, highest dielectric strength and chemical-resistant characteristic as well. Its outstanding high temperature resistance, ranging from -70Â°C to +260Â°C, made it suitale for high temperature situations as heat press machines.