The â€œTC358779XBGâ€ converts the HDMIÂ® video input and outputs it as an MIPIÂ® DSI video stream. This will drive the adoption of MIPIÂ®-compliant small LCD displays in gaming accessories, wearable computers and head-mounted applications.

4. Supports any of the four audio interfaces I2S, TDM, SPDIF or SLIMbusÂ®

A range of consumer and industrial applications, including mobile devices, digital cameras and game accessories, head-mounted products, and other wearable computers. 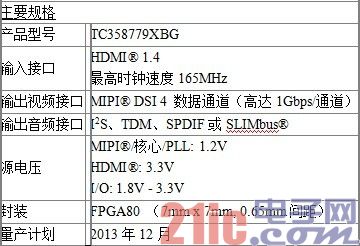